The Basics of Poker Part 1 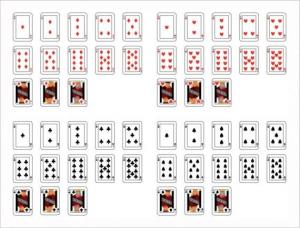 Poker is a game of chance, no question about that, but if you leave poker to chance only, then you’re ruining your chances of winning. This is because poker is one of the best examples of the concept of betting, which means that skill and psychological advantage do play a part in the game.

Today, we will explain and uncover some of the basic rules and fundamentals of poker which can help you learn the game as you play. But before that, take a note of advice to never start playing on a high stakes table if you have just learned about the rules. Always start low and make your way up as you develop a style of play that can help you win!

Let’s begin with the very basics to help you know how poker is played. The game is played using a standard deck of 52 cards, but in some variations, multiple packs and extra Jacks can also be used. The cards are ranked in the following descending order:

Ace can be either a high ranking or low ranking card, but generally speaking, it is a high ranking one. After that we have the four suits, namely clubs, diamonds, hearts, and spades, of which hearts and diamonds are the red suited cards, and spades and clubs are the black suited ones. There is however, no difference in value between these suits. Poker hands start with five cards and the player with the highest hand wins the lot.

There are poker games where there are wild cards that can take on any suit and rank as the player desires. For instance, jacks can be used as wild cards, and in some cases, the game will have specific wild card entries like one eyed jacks, deuces, and so on.

Hand Rankings and Their Descriptions

Here are the ranked cards in a descending order:

Five of a Kind – This hand is only possible when wild cards are played and is the highest possible hand. However, if there is more than one five of a kind hand, then the higher card wins. For instance, Five Aces will beat Five Kings, and likewise, Five Kings will beat Five Queens and so on.

Straight Flush – Straight Flush is the best possible natural hand (in games where no wild cards are played). Straight flush is a straight of 5 cards in order from the same suit, for instance 5 6 7 8 and 9. In this regard, if you have one or more cards of different suits, then you won’t be able to make a straight flush. A regular straight, on the other hand, is when you have either a high Ace or a low Ace. A high Ace flush will have Ace King Queen Jack and Ten, whereas a low Ace flush will have 5 4 3 2 and Ace. That said you can’t wraparound a straight flush, King Ace 2 3 and 4 for example, is not counted. A high ace straight flush is known as a Royal Flush and is the highest possible natural hand.

Check out the essentials when it comes to poker on online casinos: